The walls of watering-holes in Japan are decorated with beer posters, featuring nubile women spilling out of yellow bikinis and holding foaming pints of lager. Now, beer and half-naked ladies are two of my favourite things, so these pictures are always guaranteed to bring a grin to my face. Of course, if such a girl were to regularly knock back pints of beer, the resultant beer-belly wouldn’t be too great for her modelling career, but I don’t worry about these details too much.

One of these posters would look great on the wall of my apartment, so I’m always trying to buy them from laughing bartenders, but to no avail.
I was recently excited when I discovered an old, rolled-up poster in a derelict, disused beach-bar. “Could this be one those wonderful beer-and-bikini posters that I so covet?” I thought as I unrolled the poster. It was, indeed, a picture of a girl holding a glass of beer but, to my disappointment, she was wearing a very conservative kimono. Ho-hum! 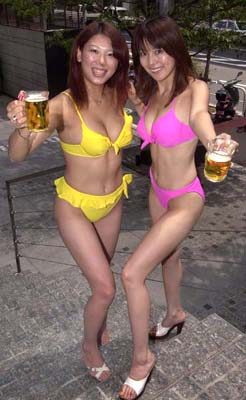 Drinking Under the Cherry Blossom 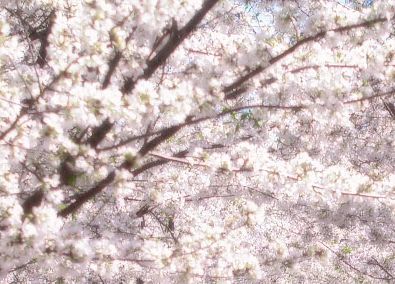 Spring has arrived once again in Japan and the beloved cherry blossoms are beginning to bloom. The entire nation goes bonkers over these pink flowers (“sakura” in Japanese), and every park, garden, or riverbank within viewing distance of a cherry blossom tree is occupied by people sitting on plastic sheets, eating sushi and drinking shochu and beer. Yep, it’s yet another excuse to get drunk!

Particularly fun are the late-night parties in lit-up parks, especially if someone brings a portable karaoke machine. Spirits are high, and people get friendly. Popular Tokyo spots are Ueno park and Yoyogi park. Every time I head to the park for a cherry-blossom party, I seem to end up playing convoluted drinking games with amiable university students, and messing about, like an infant, on the climbing frames, slides and swings.

These cherry-blossom festivals (known as “hanami”) have been going on since at least the third century- the Japanese love of sakura runs deep. Imagery of pink petals is ubiquitous in Japan, in comics, animation, and about a million pop songs. According to Wikipedia, cherry blossoms stir emotions because they are “an enduring metaphor for the ephemeral nature of life.”
As such, they were often associated with samurai, “for whom life was considered brief and beautiful, much like a cherry blossom”. With this in mind, the Yakuza gangsters often get cherry blossoms tattooed all over their backs. Unlike in the West, where flowers are considered a bit poofy, sakura is a macho symbol.

Everyone in Japan watches the news to follow the progress of the cherry blossom as it first appears in Okinawa in January and then works it’s way up through Southern Japan and arrives in Tokyo by the end of March/beginning of April, finally blooming in Hokkaido a few weeks later. This progress is always unpredictable. When I first arrived in Japan I arranged a hanami party in a park in advance, only to find that the sakura hadn’t blossomed, and the lights weren’t even switched on. So me and my friends ended up sitting like hobos, drinking cans of lager and shivering in a pitch-black, isolated park. I felt like a teenager again.

Inexplicable Name for a Family Restaurant

I spotted this inappropriately titled family restaurant in the amusement park, Hakkejima Sea Paradise. It brought a smile to my face that someone had the bright idea of calling a kid-friendly hamburger-and-ice-cream-sundae shop, “Booze Cafe”. I can only assume the proprietor had been hitting the booze himself when he came up with the name. 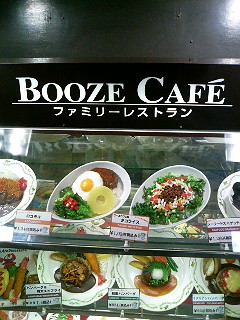 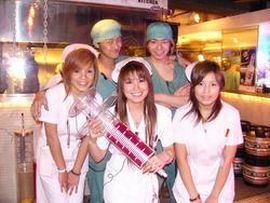 A truly bizarre novelty restaurant, “Alcatraz ER” is labeled the “Shibuya Medical Prison.” The owners must have been indecisive when picking the concept- I can’t tell if it’s meant to be a prison, a hospital, or a medieval dungeon. But who cares? This just adds to the eccentric appeal, as far as I’m concerned.

Upon arrival, you have to state your blood-type to enter (I don’t know mine, which made things confusing.) You are then handcuffed by girls in nurse-outfits (mmm, kinky!) who lead you to your “cell”- a dingy room which resembles a medieval dungeon.

Cocktails with names like “Influenza” and Acute Mental Stabilizer” are served in test tubes, or you can even drink from a hospital drip. Meals are delivered in those metal dishes surgeons use during operations. The food isn’t so tasty but presumably it’s better than actual prison food.

Dinner is occasionally interrupted to an escaped lunatic in a Jason mask, who runs around the place, terrorizing customers, (but stops short of bum-raping men in the toilets.)

While I was there, an unsuspecting birthday girl on another table was thrown the over the knee of a maniacal doctor, who prodded her arse with a giant syringe while she squealed.
I’m sure you can tell it’s a very classy establishment!
The food and drinks in this place ain’t cheap, but it’s worth a trip just for the novelty value.

One thing that makes life easy in Japan is the multitude of colourful convenience stores, or “convenies”. These brightly-lit shrines to capitalism can be found on every street corner, open all day and night, with inexplicable names like “Three F” and “Sunkus” (a woeful attempt to spell “thanks”.) Inside, they look like compact versions of Willy Wonka’s Chocolate Factory, full of shelves adorned with luminous packages and bottles branded with bewildering, boldly-written gibberish names like Pocky, Pocari Sweat, Asse, Calpis and Bubble Man II. You can buy comics, condoms, DVDs, Adidas T-Shirts, make-up, batteries, lightbulbs, bananas and, most importantly, alcohol.
Convenience stores certainly make drinking more, well… convenient. Even in the remotest suburb of Japan, at four AM, you can wander a few yards from your front door and buy a beer without any hassle. Amazing!

Every night out seems to begin with a couple of convenie beers or perhaps chu-hai (fruity, stomach-dissolvingly acidic alco-pops) consumed at home as you throw on your glad rags. And every night without exception ends, en-route to your house, with a trip to the convenie for a shopping spree of midnight snacks and preemptive hangover-cures.
The staff are awe-inspiringly enthusiastic, crying cheerful greetings the moment you enter. Such welcomes are worlds apart from what you’d expect in the squalid inconvenience stores at home, where you’d consider yourself well-attended-to if the clerk flinched briefly to look up from his magazine. The Japanese shop-staff take remarkable pride in their jobs, even if their jobs are minimum wage. And working all night in a convenience store is not without it’s perils. These poor souls have to deal with incromprehensible drunken customers such as I. Convenience store workers of Japan, I salute thee!

St. Patrick’s Day is a fine excuse for a party wherever you are, and Japan is no exception. This weekend I hit Tokyo to check out the St.Patrick’s Day parade in Harajuku, which included a marching band, cute cheerleaders, some confused-looking Irish Wolf-Hounds and, of course, the ever-present sea of advertising for Guinness. Then I moved on to a couple of Irish Pubs in Shibuya (The Dubliners’ and The Hobgoblin) to continue the festivities with a few pints of the black stuff. The atmosphere was great and there is something inherently enjoyable about watching drunk Japanese people trying to river-dance. 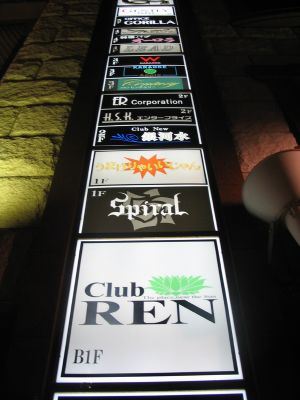 Being reduced to paying for someone to talk to you is considered suicidally depressing in the West, but in Japan it’s a national past-time. Inebriated salarymen with low self-esteem regularly flock to “hostess bars” to enjoy the company of scantily-clad young ladies, who pour their drinks, light their smokes and laugh at their jokes. You can spot these ladies on the streets of Tokyo, trying to charm men into their clubs with their sparkling personalities.

Female customers are getting into it too, with “host bars” increasing in popularity, and girls spending pots of money to spend time with ingratiating men with bleached-blonde hair and open-necked shirts, who resemble George Michael, circa 1983. Being a host sounds like a dream-job, but it’s not quite the cushy gig you might think. Apparently, the clientelle of host clubs largely consists of malevolent off-duty hostesses, who derive sadistic pleasure from treating hosts like shit, as a way to let off steam after work. Ha ha!

All of this would hold little interest for me were it not for the knowledge that these establishments tend to refuse admittance to gaijin, for fear that foreign customers would be disappointed to discover their hosts and hostesses can’t speak English. After learning this, my curiosity was aroused. I suddenly wanted to hit a hostess bar but, as anticipated, I was repeatedly turned away by inscrutable, stony-faced bouncers.

So, when a friend and I were strolling into town one night, we were surprised when two young hostesses dressed in revealing, customized military uniforms approached us and invited us to enter their club, the oddly named “Army’s Bar.”
“What the hell, let’s do it. Might be a funny experience,” we decided, and followed the girls into the basement bar. They waited until we were seated before telling us the deal- 1000 yen for every fifteen minutes, but drinks were free. That’s $10 for a few minutes of mere conversation, so it was was with trepidation that we signed up.
We resolved to take advantage of the cheap booze, and hastily ordered a round of tequila shots.

My friend and I each had a hostess to entertain us. Mine had a phony smile and cold, bored eyes, and asked me a sequence of predictable questions, such as “where are you from?” “what do you do for a living?” and “how long have you been in Japan?” ie: all the questions I get asked on a daily basis and am sick of hearing. I really didn’t want to pay for that, so I steered the conversation in a different direction, asking the girl if she enjoyed this line of work and how she felt about the regular customers. She seemed taken-aback but amused by this line of questioning, evidently not a common topic in Army’s Bar.
I pity the poor fellows who are so hopelessly insecure and starved of attention that they have to resort to this.
I noticed my friend looking over impatiently, having even less fun than me. There was only one thing for it: “Barman! More tequila! And keep ’em coming!”

We stumbled out of the club moments before our fifteen minutes ran out, with my curiosity sated and seven or eight tequila shots down the hatch.

Gaijin Tonic
Create a free website or blog at WordPress.com.