One of my regular haunts is “Grade A,” the bar on the fourteenth floor of the Camelot Hotel in Yokohama. Despite the hotel’s name there is no “Knights of the Round Table” theme in evidence- as usual in Japan, the name is seemingly irrelevant. Conveniently, because it’s in an international hotel, there are English menus, and the other customers aren’t too flabbergasted to see you there.
But the chief appeal of this place is the 2400 yen, two-and-a-half-hour, all-you-can-drink deal that’s available between five thirty and eleven every week night.
An added bonus is the gaggle of nubile young ladies wearing skin-tight minidresses who serve the drinks. Whenever I go there the only other customers are sozzled, be-suited businessmen who come to leer at the ladies. You can even get a neck rub and a special cocktail for 1000 yen extra. The girls deliberately jiggle their bodies while shaking the cocktails for the amusement of their patrons. You can even be spoon-fed tofu, like a baby. 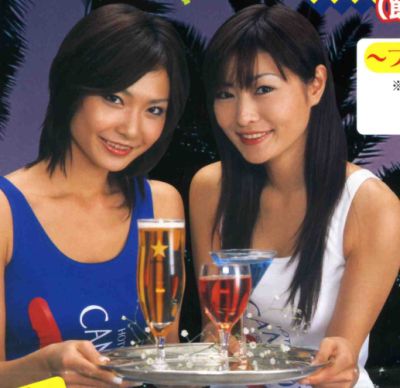 Obviously, the atmosphere of dated chauvinism might not be to many peoples’ tastes- I feel sorry for the solitary female members of large office parties, who’ve been reluctantly dragged to the Camelot by inconsiderate male colleagues.
But part of the fun of this politically incorrect establishment is that it actually lives up to stereotypical image many people have of Japan. It’s practically a history museum. In addition to the outdated values, the whole place seems to be straight out of the early 1980s, even the wallpaper.
And I won’t deny that the sexy waitresses are easy on the eye.
So if you want insanely cheap drinks, scantily-clad ladies, and an uniquely Japanese vibe, Grade A lives up to its name.
Here’s the website

This entry was posted on Friday, July 20th, 2007 at 12:26 am and is filed under Alcohol, Bar Reviews, Crazy, drinking, Japan, Yokohama. You can follow any responses to this entry through the RSS 2.0 feed. You can leave a response, or trackback from your own site.

4 Responses to Grade A