While in the resort area of Izu today, I noticed signs featuring a rather gormless and possibly lobotomized alligator.

They were advertisements for a place called “Banana Wani Park,” which is a small fun-park themed around bananas and alligators. A surreal concept for a place, I trust you’ll agree, and I have no idea quite why two such diverse subjects as bananas and alligators have been put together and celebrated.
(It could be “banana and crocodile park” actually, as there is only one word for both crocodiles and alligators in Japanese, “wani.” This fact inspired me to find out the difference between the two animals. Apparently, alligators have U-shaped heads, while crocodiles are V-shaped. Also crocs don’t mind salt water, but gators can’t tolerate it. In Japan, turtles and tortoises also share one name, (“kame”), as do mice and rats (“nezumi”), which means that, in Japan, Mickey Mouse may as well be called “Mickey Rat”. Not so cute now, eh! Anyway, I digress…)
I’m in favour of more theme-parks which unite random animals and fruit for seemingly no reason. How about “Strawberry Rhinoceros Park” or “Mango Zebra Park?” Or perhaps “Raspberry Sloth Park” or even “Guava Donkey Park”? These tourist attractions would make the world a better place.

Garage Land is a great, poky little punk-rock bar in Shibuya, just a few minutes from the station, but rarely overcrowded due to the lack of an elevator to take you to the third floor. The gaudy, yellow and pink sign outside, which caught my eye, is designed to look like the cover of the Sex Pistols’ “Never Mind the Bollocks.” 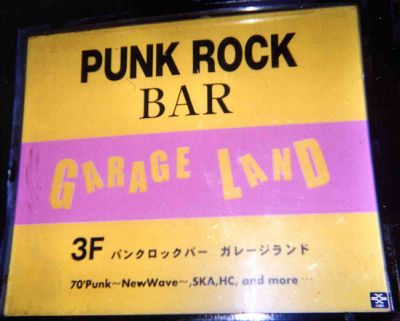 It’s a popular hang-out for visiting rock musicians. Inside, the walls are covered in the autographs and drunken marker-pen doodlings of the dozens of punk celebrities who have passed through while in Japan. The faces of Joe Strummer and the Ramones look down from posters on the walls, and their music blasts out of the speakers.
The price of booze is the only thing that isn’t punk rock in this place. (It’s a little pricey.) However, Monday to Wednesday are “Happy Days” and beer is 500 yen.

Don’t Black Out When Your Friends Have Pens

It’s nice to see that the international custom of drawing on unconscious, drunk friends with marker pens is alive in Japan. The other afternoon I spotted this unfortunate mess of a man outside a beach bar on Enoshima beach, where so many college students spend the summer drinking. More creative pranksters would have written on him with factor 50 sunblock and dragged him into the sunlight. 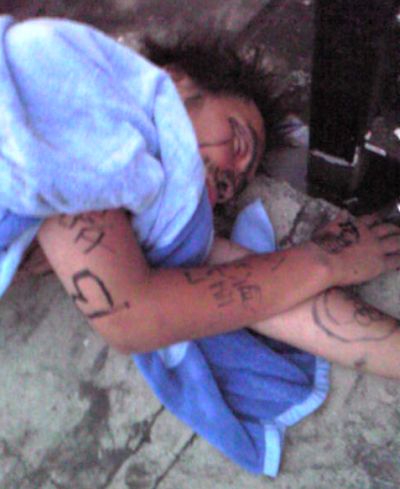 Nice Name for a Bar

Here’s a picture of the charmingly named “Boozee,” a bar I occasionally visit, in Yamato city.

English teachers in Japan get up to all sorts of monkey business, booze-guzzling and hanky panky, but perhaps their most heinous offence is awful teaching. Often, teachers know about as much about conversational skills as Harpo Marx, and think that “verb-conjugation” is some kind of sexually transmitted disease. Now I’m sure this blog is littered with dozens of horrific grammatical mistakes, and I don’t claim to be any kind of super-teacher, but some of the “teachers” I’ve known are so inept that they could be sued under the trade descriptions act for calling themselves such.

One young Californian colleague of mine once found herself teaching an old man whose English was very advanced. Among the notes she had written during the class, was the word “Japane.”
“What is this word?” The stony-faced man asked.
“It’s “Japane.” The country we’re in now,” she smiled.
Now, when you consider that this girl had filled out numerous documents and application forms regarding Japan, read guidebooks about Japan, and had written countless group emails, letters and postcards from and about Japan, it’s pretty astounding that she chose to spell it with an extra “E.”
The elderly man was less than impressed, particularly since he, himself, was an esteemed professor of English Literature at a prestigious university in Tokyo. If you’ve read the complete works of Shakespeare, Milton and Chaucer in English, then a ditzy Valley girl won’t be able to teach you anything, except how to accessorize.

On another occasion, a young instructor swaggered up to me in the teachers’ room after a class and said, “Hey, man, check out this textbook! There’s a misprint.” He waved a brightly-coloured book which we regularly used for children’s lessons, in front of my face. “The dumb-asses spelled “Wednesday” with a “D,” “Wed. Nes. Day.” What the hell is that supposed to mean? Hah hah! Morons!”
“Er…actually, I hate to tell you this, but that’s right,” I explained. “There’s supposed to be a “D” there.”
The rookie teacher scratched his head, confused. “Oh. Really? Oops. I just scolded a kid for spelling it that way.”
Talk about the blind leading the blind!

This drinking game is not strictly Japanese, but it’s based on a Japanese movie, “Battle Royale”. I happened upon the rules to the game on LazyDork.com which is marvelous site full of drinking games based on films as diverse as “Saw” and “Sleepless in Seattle”. You have to drink each time certain recurring incidents take place on screen, which always results in much drunken abandon (be careful while playing the “Brokeback Mountain” game!) The site is lots of fun, but one can only imagine what the hell playing the drinking game based on “Hotel Rwanda” must be like.

“Battle Royale” is a movie in which a class of delinquent high schoolers are drugged, dumped on a desert island and forced to kill each other until one one person remains, as part of some warped governmental experiment. A very excellent movie. If knocking back shots while watching a flick about Japanese teens dispatching each other with knives and machine guns is your idea of a good time, read on.
Here’s how you play:

1. A new weapon is shown

2. Someone breaks down emotionally

5. Anyone shoots a basket

6. Anyone talks about a crush or someone being “cute”

7. A new danger zone is declared

Why not give this charming and wholesome little game a try. Although, once the booze kicks in, the subtitles may begin to blur.

I Pay for my Laziness

I’m a naturally indolent man so, when lumbering home drunk, I often eschew steep staircases and slide down the railings instead, embarrassment being preferable to physical exertion.
One stormy night last week, I was diabolically smashed after two successive all-you-can-drink sessions in a hotel bar in Yokohama city, when I spilled out of the train at the station near my home, and squeezed through the ticket gates. A few commuters were huddled around the exit of the station, looking fearfully at the streaks of lightning overhead, reluctant to step out into the torrential downpour. Coming from Britain, where it rains more often than not, I was not fazed by this. I was, however, disconcerted by the long flight of stairs that I was going to have to descend. Drained of energy after a week of work and be-fuddled by booze, a slow dreary trek down the vast mountain of steps was about as appealing to me as eating effluence. Alas, it was unavoidable. Unless…
I spotted the shiny silver railing running down the center of the staircase, raindrops glittering on its surface. This railing wasn’t invented for people to hold on to while climbing the steps, it’s an efficient time-saving device, I concluded. Inebriated enough to have lost all rational sense, I decided to slide down the railing, indifferent to the inevitable crowd of disapproving spectators.
It wouldn’t be the first time I had utilized the station railing in this fashion. I had harnessed its effort-saving properties a few weeks previously.
I sat on the silver saviour and lifted my feet. Big mistake.
The previous occasion, crucially, I had been wearing jeans, the tough denim enabling me to slither down the railing at a snail’s pace, whereas tonight I was wearing a brand new suit, the smooth fabric of the trousers creating no resistance at all. This factor, combined with the lubricating quality of the rainwater on the slippery railing, resulted in me zooming down the railing faster than a speeding bullet-drain. Oh God. Like an out-take from a skateboarding video, I flew off the end of the railing and smacked onto the hard tarmac below, my graceless fall slightly cushioned by a shallow puddle.
The residents of my neighbourhood are generally startled to see a giant white man merely walking down the street, but when one smashes into the ground before them with an apocalyptic thud, they are horrified. Pretending I wasn’t in an enormous amount of pain and that I wasn’t furious that my expensive new suit was plastered in mud, I clambered to my feet, held my head high, and walked out into the lashing rain, half-expecting to be struck by lightning at any moment.