No, that’s not the title of a movie (but it really should be!) It’s the latest development in hi-tech Japanese beer.
Once again, the Japanese are light years ahead of everybody else- on Tuesday, the famous Sapporo brewery announced it’s plans to brew “space beer.”
The eccentric egg-heads at Sapporo are mixing up some astro-moonshine, using the offspring of barley which once was stored at the International Space Station.
It ain’t the Mir Space Station. It’s the BEER Space Station. (Hoho, You see what I did there?)

Yep, apparently the barley used the make the new brew is the third generation offspring of barley which was stored in the space station for five months. “Grandson of Space-Beer.” Hey- that’s an even better name for a movie! 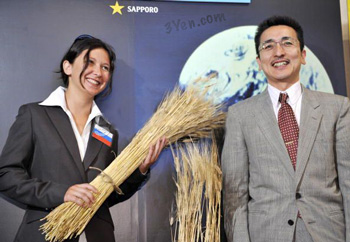 Apparently the forward-thinking brewers want to get ready for the future- when we may well have to do all our beer-brewing in outer space. You see, if we can make beer from barley grown in a space station, this surely proves that humans could be self-sufficient in space.
That’s right, screw growing vegetables- beer is the top priority!
Well, I suppose if I discovered I were stranded for eternity in the middle of outer space, I would need a stiff drink.

The Sapporo company, along with brainiacs at Okayama University, plan to produce 630 liters of beer using 40 to 50 kilograms of barley descended from plants grown in outer space. Enough for a modest house party, then.

This entry was posted on Friday, May 30th, 2008 at 1:29 pm and is filed under Alcohol, Cool, Crazy, drinking, Fun, Japan, Science, Weird. You can follow any responses to this entry through the RSS 2.0 feed. You can leave a response, or trackback from your own site.