Heartland Bar in Roppongi Hills is a notorious pick-up joint where gold-digging 30-something women go to ensnare generous foreign banker boyfriends. But lately pickings haven’t been so rich for the Heather Mills-es of Japan. Thanks to the recent financial shitstorm, much to the ladies’ chagrin, the bankers are few and far between, so they have to make do with “IT consultants in polyester suits”, The Times Reports. My heart bleeds! 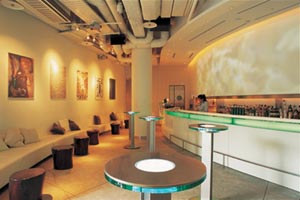 Girls come to Heartland all the way from commuter towns in Saitama or Chiba, usually aiming to avoid squeezing into the last train home, by escorting an Armani-clad exec to his penthouse suite… but these days, after several hours of watching the ice melt in their cocktails while waiting for Mr Big to appear and buy them a drink, they have to dramatically drop their standards and settle for trudging back to a guesthouse to share a mouldering futon with an unemployed ex-NOVA teacher.

This decline has been happening for months now. It’s not for nothing that Metropolis Magazine voted Heartland the easiest place to pick up ladies in Tokyo. I can attest to that. If you’re feeling randy this weekend, and you were already too broke to have been affected by the credit crunch, slap on some Brut, throw on your cheap polyester suits and head on down to Heartland.

This entry was posted on Friday, November 14th, 2008 at 9:59 pm and is filed under Alcohol, drinking, Fun, Girls, Japan, Tokyo. You can follow any responses to this entry through the RSS 2.0 feed. You can leave a response, or trackback from your own site.