Another day, another product from Kirin, a company whose employees are required to have the imagination of Willy Wonka.
Not content with being responsible for countless teenagers vomiting their dinner up after guzzling their lethally cheap and strong 8% chu-hai, the malevolent Oompa-Loompas at Kirin have come up with an equally deadly concoction- alcoholic cola! It’s called “Cola Shock”. This is an idea so simple and marketable, that the “shock” is that it doesn’t exist already.

It’s such a ridiculously obvious idea that I can only assume that drinks manufacturers have, until now, had an unwritten agreement with each other to restrain themselves from producing Cola chu-hai, because the potential appeal to teens would be of concern to parents. Plus, youngsters might drink “Cola Shock”, mistaking it for ordinary cola. It would be a “shock” in itself, discovering that young Yuta had been unwittingly drinking booze for weeks, had developed a fierce alcohol-dependency, and was raiding the drinks cabinet and waking up shaking with the DTs, begging for a shot of whisky on his coco-pops before nursery school.
But, times are hard, and perhaps someone at Kirin finally stood up in the boardroom and said “F*ck it, profits are down. I’m going to come right out and say it. It’s finally time to unleash the alcoholic coke!” 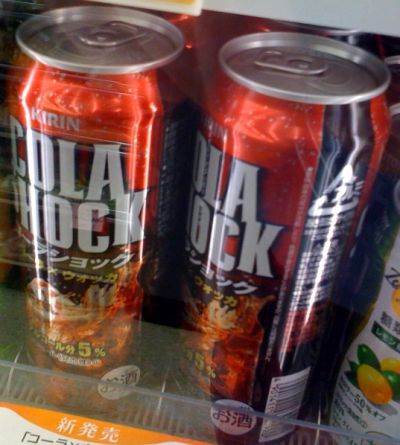 I spotted “Cola Shock” in the convenience store and decided to give it a try. It’s actually drinkable, which is to say, if you like the idea of cola chu-hai, you won’t be disappointed (connoisseurs of fine wine won’t be singing its praises). I mean, it’s sickly and acidic, but no more than your standard cheap supermarket cola mixed with Bacardi or Rum. Ice helps dramatically.
Expect an imitation from Asahi within a month!

This entry was posted on Tuesday, July 7th, 2009 at 11:59 pm and is filed under Alcohol, Cheap, Cool, Crazy, drinking, Fun, Japan. You can follow any responses to this entry through the RSS 2.0 feed. You can leave a response, or trackback from your own site.