What is supposedly Japan’s second largest annual St Patrick’s Day celebration (after the one in Omotesando, Tokyo) took place last week in Matsue.
Matsue, in Shimane prefecture, is rather remote, and quite an unusual location for an Irish festival. Many of the festivities are centered around an Irish pub that has the distinction of only being open one day every year!
It sounds like a potentially weird and entertaining event, and Andrew Hill was there to see it first hand:

I’ve constantly heard it billed as the second largest St. Paddy’s festival in Japan, next to Tokyo. In reality I think it’s probably the biggest outside of the greater Tokyo Metropolitan area. Fun times though, I was on TV screaming about the holiday. Matsue is obsessed with the Irish because (only in Japan) famed writer Lafcadio Hearn lived in the city for several months back in the late 19th century.

The Irish pub they open twice a year is neat, but nothing great. There’s a museum in Matsue inside what was once a large bank. Downstairs in the vaults, they hold special exhibits, and during the St. Paddy’s weekend, they convert the largest vault into a bar, and bring in kegs of guiness and round up an Irish music band, consisting of a few local expats and several Japanese. They sounded pretty good.

All in all, fun, but nothing special really. Next year the lead foreign musicians are leaving Japan, so the fate of the band is up in the air. Probably better staying in Tokyo to celebrate the holiday.

It looks like a cute little local festival families- not ideal for a mammoth all-night drinking bender, but good fun nonetheless! here are some of Andrew’s snaps: 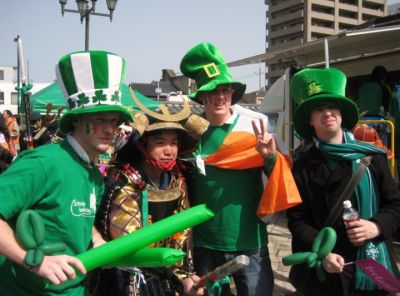 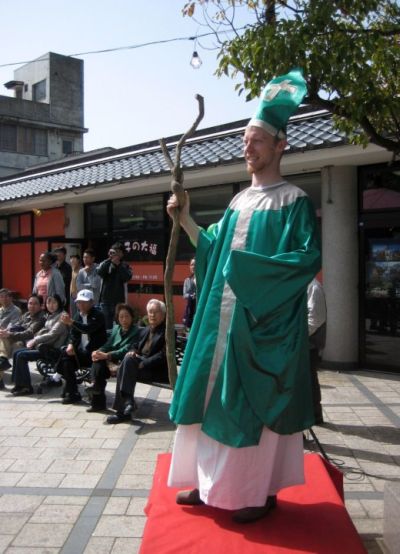 This entry was posted on Wednesday, March 24th, 2010 at 11:16 pm and is filed under Alcohol, Cool, Crazy, drinking, Festivals, Fun, Japan, Weird. You can follow any responses to this entry through the RSS 2.0 feed. You can leave a response, or trackback from your own site.