I thought I’d put all the Japanese drinking games I’ve posted before in one handy place for all you adventurous boozehounds!

Predictably for a country obsessed with the concept of “play,” Japan has dozens of drinking games to choose from. Most of the games have absurdly complicated rules, and rely on the drunkest/stupidest person making a mistake and then having to glug down their drink as a forfeit. When someone in Japan has to neck a glass of booze, their tormentors goad them on by chanting “iki iki iki!” (Be careful not to say “iku iku iku!” which is what Japanese people gasp during orgasm, fact fans.)
With my voluminous western beer belly, I certainly have an unfair advantage in these games. Indeed, while playing drinking games with the Japanese, I often find myself consistently winning, getting thirsty, and then deliberately losing, just so I can finally take a sip of my drink. Despite this, drinking games are still fun to play because, by nature, they transcend language barriers, and are a surefire way to kick-start a party. Below is a list of some of the more popular Japanese drinking games.

Pin Pon Pan
Being a strong drinker is no guarantee of safety in a game of “Pin Pon Pan.” It’s such a fast-paced and confusing game, that being an uncoordinated dimwit like me is sufficient to ensure that you lose and get sloshed every time. The rules are thus:

First, someone kicks off the game by saying “Pin,” and whoever is sitting to their left must quickly continue with “Pon.” The next person in line must then say “Pan” whilst simultaneously pointing their finger at any random player at the table, who has to immediately say “Pin,” which starts the whole process again.

As you can imagine, there are plenty of opportunities to screw up. If you hesitate, it’s “iki iki iki” time. If you say the wrong word: “iki iki iki.” If you point at the wrong time, or you forget to point: “iki iki iki.” Hey Presto: lots of drunk people!

The Osama Game
The “Osama Game” is popular among uninhibited university students, and involves much hilarity, humiliation… and chopsticks.
Before you ask, the name “Osama” is not a reference to Osama Bin laden (such a game would, of course, be “Hide and Seek.”) “Osama” actually means “King” in Japanese. In the game, one player is elected King, then he or she thinks up funny dares for the others to perform. Players are inevitably required to embarrass themselves, so I wouldn’t recommend the Osama game to sober or timid folks.

Here’s how to play: Take a chopstick for each player and, with a pen, write “Osama” on one of them, and number the others from 1 upwards. Next, someone holds the chopsticks in their fist, so that the numbers are concealed, and everybody draws a stick, being careful not to reveal their number to the others. The lucky guy or gal with the “Osama” chopstick gets to be the King.
The Osama then decides on a task, and states the chopstick numbers of the players who must perform it, (without yet knowing who those players are). For example: “number two must kiss number five!” or “number three has to do the Macarena!” or “numbers seven and eight must down their drinks!” Everyone then reveals their chopsticks, and the unlucky buggers with the chosen numbers have to stand up and do as the king commands. All of this leads to a succession of antics which are pant-pissingly funny (until you are the person making a tit of yourself.)
After each deed is done, the chopsticks are gathered once again, and the process is repeated. Usually everybody gets a chance to be the King, and players relish the opportunity to exact revenge on those who tormented them in previous rounds of the game.

As the night progresses, and the booze flows, each successive player elected as Osama becomes more sadistic and creative than the last, as they fiendishly cackle their orders. “Number three must lick number one’s armpit! Mwah-ha-ha!”
I was once ordered, by a particularly inventive bastard, to take off my left sock, put it on my right hand, then walk around the bar shaking hands with as many strangers as possible. I also had to pretend to have an orgasm as I shook each confused person’s hand. There were a lot of bewildered people in that place, I can tell you. Luckily I was drunk at the time.
As you can imagine, the morning after playing the Osama game, people tend to wake up and groan with shame.

The Pocky Game
The Pocky game is another perennial favourite of inebriated Japanese university students, and involves chocolate-covered biscuit sticks called Pocky. (I’m addicted to Pocky and its ever-growing myriad of different flavours, including strawberry, almond, and green tea. If you are not in Japan, do not worry: You can get hold of Pocky in western countries, too, in Asian supermarkets and import shops.) If you don’t have a sweet tooth, Pocky’s savoury alternative, Pretz (pretzel sticks available in flavours such as pizza, corn, tomato, and salad) can also be used.

The Pocky game is a very simple game for two players (and several laughing spectators). Here is how you play: Take one Pocky stick. Each of the two players puts one end in his or her mouth and begins munching. The pair get closer and closer with each bite, creating an awkward intimacy, like the famous spaghetti sucking scene in “Lady and the Tramp”.
The first person who chickens out, and lets go of the Pocky, loses the game and has to down their drink. If the two players end up kissing, they are safe from punishment (but not from Herpes!)

The Pocky game is an exciting proposal at mixed parties, especially if you get to lock lips with someone you’ve got a crush on. However, I strongly advise against playing it with your buddies on poker night.

The Yamanote Sen Game
Perhaps the best known drinking game among the Japanese, this is named after the circular Yamanote train line in Tokyo. Players go around in a circle (like the titular train line) and each player randomly names any station they can think of that is on the Yamanote sen. While playing, everyone claps in rhythm, and each player has to say their chosen station name on the right beat. If they hesitate, repeat a station already named, say a station on the wrong train line, or can’ t think of anything to say, they have to drink.

Yep, the game is as tedious as it sounds, I’m afraid, but it’s inexplicably popular so I thought I should mention it. 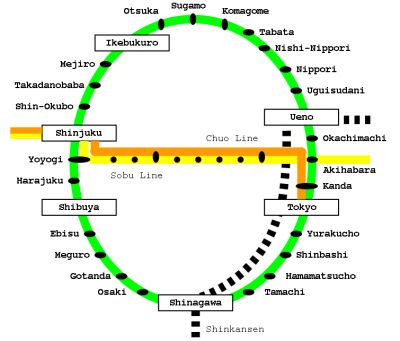 Even though it’s called the Yamanote Line game, you can play with any category, not just station names. It could be an easy topic, for example pop singers or capital cities, or it could be ridiculously difficult, like Olympic shot-putters, or Yugoslavian film stars.
Another variant of the Yamanote Sen game is the “No Laughing Game” (Waracha Ikenai Gemu). The going-round-in-a-circle and hand-clapping format is the same, but the aim is to make the other players laugh with silly faces and noises. If someone giggles, they have to drink. The cold silence after each tortured attempt at mirth is painfully awkward and embarrassing, and I tend to laugh intentionally, out of politeness.

When I first heard the name of the Yamanote Sen game, I automatically assumed it involved stopping for a drink at each of the 29 stations on the Yamanote line, all in the same day. That sounds far more fun than the actual game, although to play you would need to be equipped with a portable stomach pump and an extra pair of pants.

Kiku No Hana
Speaking of stomach pumps, here is a game for the hardcore, serious drinkers! “Kiku No Hana,” which means “Chrysanthemum Flower,” (you will find out why later) is an enjoyably brutal game involving much consumption of sake for the loser.

You have probably seen the old trick in which a magician hides a sponge ball under one of three cups, then moves the cups around quickly, after which an audience member guesses which cup the ball is under. Well, this game would be the same, if the person who picked the correct cup was actually the loser, and was subsequently forced to fill the other two cups with booze and drink them (That deviation that would certainly add an edge to children’s parties!)

Here’s how to play: Take a sake cup for each player and put them face down on a tray. One player must then conceal something under one of the cups (traditionally a chrysanthemum, hence the name, but a coin will do nicely on one of those rare occasions that you don’t happen to have a chrysanthemum on you.) Next, the tray is passed around in a circle and each player must pick up a cup. If you lift the cup under which the coin is hidden, you have to take a bottle of sake and fill all the cups that have already been turned over, then drink the lot. That means that if you’re the sixth player and you’re unlucky enough to lose, you have to knock back six cups of sake. If the tray finds its way back to the sneaky bastard who concealed the coin in the first place, then he will get his just desserts and have to fill the entire tray of overturned cups with sake, and glug it down.

Here is a fun way to spice up the game: Instead of a coin under the cup, hide a little piece of paper and scrawl a message on it for the unfortunate loser. Words of sympathy, like “Ha ha! You’re f*cked!” or “Drink up, loser!”
An intense game, Kiku No Hana could be adopted as a version of Russian Roulette for thrill-seeking Alcoholics Anonymous members.

This entry was posted on Monday, October 18th, 2010 at 10:22 pm and is filed under Alcohol, Cool, Crazy, drinking, Drinking Games, Fun, Japan, Tokyo. You can follow any responses to this entry through the RSS 2.0 feed. You can leave a response, or trackback from your own site.