Land of the Rising Sunburn and Suntory Whiskey

Monday was “Ocean Day” in Japan, which means that the rainy season is officially over, and the summer has begun! Also on Monday it started raining for the first time in weeks and hasn’t stopped since.
All across the land there are beach bar and beer garden owners shaking their fists at the sky.
But they needn’t worry, because before long I’ll be showing up and emptying my wallet. (Unless they’ve got cheap all-you-can-drink-deals, in which case they’re truly buggered.)
Yes, summer is a always a great time for al-fresco beer-imbibing, wherever you are (except Saudi Arabia, where it’s punishable by several months in prison.)
All across Japan, department stores and hotels cover their roofs with tables, call them beer gardens, and let people go there and get pissed-up for not much money. A particular favourite of mine is the Kudan Kaikan in Kudanshita, on Tokyo’s Hanzomon line, (and that has nothing to do with the fact that the waitresses are dressed as playboy bunnies, honest.)

About an hour south of Tokyo is the Shonan beach area (where I used to live, an hour on the Odakyu line from Shinjuku) where you can sit back and sup beers and watch the sun set over the ocean, while people let off fireworks. Enoshima beach, while dirty and overcrowded, is a favourite destination of mine (and this has nothing to do with the fact that the beach is teeming with nubile college girls in bikinis, honest.)

If you despise the beach boozing because your beer gets warm in the sweltering summer heat, never fear- I’ve just learned (from Japanprobe) of an amazing new innovation which will solve your problem. An enterprising company has started selling beer mugs carved from ice, and you can buy them online for 580 yen. They last an hour in the sun, apparently.

And if you want to avoid the heat altogether, you can always pop into Ginza’s Ice Bar to cool down. It’s entirely full of ice, and is cold enough to freeze your nipples off.
I might go there, myself- it’ll be nice to stop sweating for the first time since May.

Don’t Black Out When Your Friends Have Pens

It’s nice to see that the international custom of drawing on unconscious, drunk friends with marker pens is alive in Japan. The other afternoon I spotted this unfortunate mess of a man outside a beach bar on Enoshima beach, where so many college students spend the summer drinking. More creative pranksters would have written on him with factor 50 sunblock and dragged him into the sunlight.

Every summer I like to hit Japan’s beaches, regardless of my enormous pasty beer-belly, my tendency to get severely sun-burned, and the fact that the beaches are overcrowded and dirtier than Paris Hilton. This is for two reasons- the plethora of wooden “beach bars” that are erected along the seafront each summer, and the hordes of women in bikinis. Life is sweet, but am I turning into Benny Hill?

Shonan beach is nearest to my house. It’s a popular summer day-trip destination for residents of Tokyo and Yokohama, attracted by the surf, outdoor music events, parties and fireworks displays. It’s a long beach running along the coast of Kanagawa, consisting of lots of smaller beaches with different names.
Enoshima is the busiest of these, especially in August when an annual fireworks event attracts about 150000 people. Locals claim Enoshima is the “Miami beach of Japan”, and although it’s too small and grubby to live up to this tag, there is an appealingly hedonistic, spring-break vibe to the place. It’s a hot-spot for trendy youngsters who go there to hang out in the summer holidays. There’s a big surfer scene despite the minuscule waves, which mainly operates as an excuse for bronzed posers to mince about in expensive wet-suits. 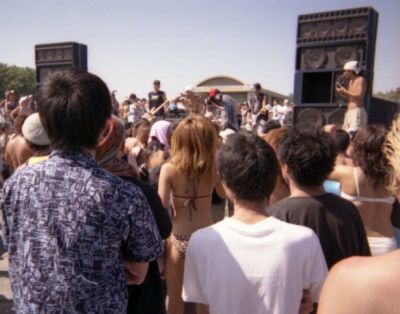 This is also where the orange-faced Shibuya girls go to top-up their summer tans. The ordinary girls, meanwhile, sunbathe covered in factor 50 sunblock to avoid getting a tan (which sort of defeats the object, but who’s complaining. Thank God for the invention of mirrored sunglasses!)
Speaking of which, watch out for the pervy, paparazzi-style photographers who stalk the beach with enormous telescopic lenses, looking for exposed flesh. If the lithe bikini-clad young folk don’t make you feel self-conscious stripping down to your swimwear, then the sleazebags with cameras will!

In the evening you can watch the sunset while drinking in the wooden beach bars. There are dozens of these bars lined up next to each other so it’s ideal for a bar crawl, and the inebriated holiday-makers inside are usually in high spirits. These bars are, however a bit pricey so you could choose to follow the example of the local teenagers, grab some convenience-store beers and set off fireworks on the beach. 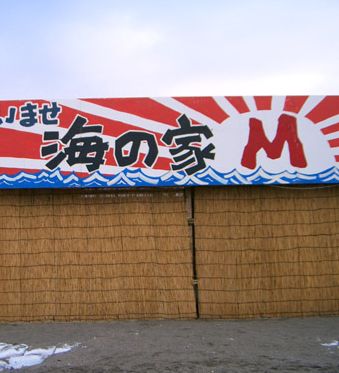 Other beaches in the area include the slightly less-crowded Kugenuma beach, which is the home of beach-volleyball in Japan, with an annual summer tournament. Chigasaki, meanwhile, is the birthplace of Japan’s answer to the Beach Boys, The Southern Allstars. Contrary to their paeans to the place, the beach is crowded and swamped in litter, but it holds some good live music events, and a traditional festival in which a portable shrine is carried into the ocean takes place at sunset on July 20th. Yuigahama beach is a bit less dirty and has it’s own fireworks spectacle in mid August. It also has trance and reggae parties, and last year Yuigahama was host to the MTV beach bar, with daily broadcasts on MTV. There’s also Zushi beach, which has a live-house called Otodama Sea Studio on the beach, where lots of semi-famous Japanese bands perform live in the afternoons.

Alas, on September 1st the fun ends in Shonan, the lifeguards look for new jobs, the beach bars are dismantled, and everyone stops going to the beach (even if it’s still hot.)

Directions: Enoshima beach is close to Katase-Enoshima station (on the Odakyu line, about an hour by express train from Shinjuku)
Kugenuma beach is near Kugenuma-kaigan station, also on the Odakyu line, a couple of stops before Katase-Enoshima.
Chigasaki beach is about a 15 minute walk from JR Chigasaki station, about 1 hour from Tokyo station on the Tokaido line.
Yuigahama beach is about a twenty minute walk from JR Kamakura station (an hour from Tokyo station on the Yokosuka line.) Zushi beach is near Zushi station, also on the Yokosuka line.