I thought I’d spice up my site by mentioning “Wet Hot Sale,” a raunchy Japanese sex comedy which manages to combine the twin passions of sake and sex.

In the ludicrous story, a pub owner discovers the secrets of making delicious sake by using the bodily juices of sexy virgins, who do aerobics in specially-designed sake-filled leotards. The sleazy publican learns that this demented technique won’t work unless the girl is virginal, so he coerces his comely daughter into getting hymen regeneration surgery so she can help him make the tasty drink. Charming! It’s a heart-warming story for your children and grandparents to enjoy.
I’m sure Steven Spielberg is being lined up to direct a Hollywood remake as we speak.

While wandering in and out of the bars, cafes, shops and art galleries of Tokyo, I often pick up flyers for upcoming parties and events. Sometimes I happen upon flyers which suggest that there are things going on in the city are too freaky to comprehend. Below are a couple of truly weird flyers which recently caught my eye.
First is something called “Department H presents: Salon KITTYFIRE 2099” which takes place on the first Saturday of each month, in the J-Pop Cafe in Shibuya (which is where Rinko Kikuchi flashed her you-know-what in the film “Babel,” movie buffs.)

God knows what goes on at this place, but it involves Burlesque, dancers, music and Drag Queens. The back of the flyer says “Don’t ask! Just Come.” You can find out more at the website.
Even more crazy is the slightly terrifying-sounding “Sadistic Circus,” which is billed as a “Fetish Spectacle Party” and “a forbidden festival of passion.”

According to the Sadistic Circus Website “the program includes “Yasukuni-Shrine Freak Show,” “Fire Breathing and Balance Ball Circus,” “Magic Show by Arabian Beauty Troupe,” “Witch and Spider Woman,” “Dark Gothic Dance of Homosexuals,” “Tickle Wrestling by Female Office Workers in Their Uniform,” “Dance Show by Naked Beauties Powdered in Gold,” “Shudderingly Exciting! Bound Show,” “Blood Spitting Show by Self-Tied Beauty,” “Kinky Photographer’s Live Shooting Show,” “Sado-Masochistic Hanging Show,” “Foreign Sadistic Man and Masochistic Japanese Women,” “Taming Show of the Beast Woman,” “Explosive Taming Show,” “The Advent of the Queen” and so forth.”
They go on to say there is “no admittance to pregnant women, people under 20 and those who have heart problems. This is a secret party for fetishistic adults and kinky somnambulists in the city. Feel free to express yourself with a costume such as bondage or rubber.”
…Bloody Hell!

More Nihon nonsense! Today was the Kanamara festival in Kawasaki city, which basically involves a lot people parading a giant pink penis around the town. Otherwise known as the “big metal penis festival,” the event is traditionally a celebration of fertility. Among those in attendance were couples hoping for children, bemused locals, and a fair few transvestites.

You can read more about it at Japanzine

Below are some photos I took at the event a couple of years ago. 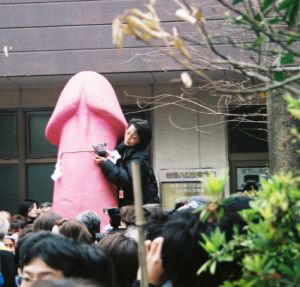 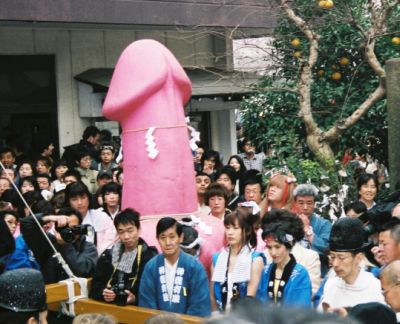 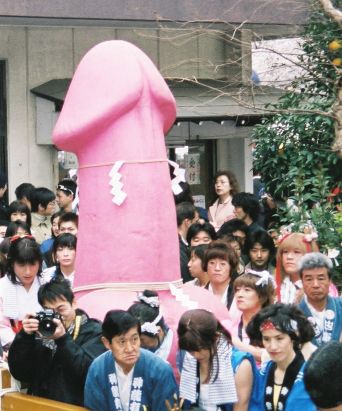 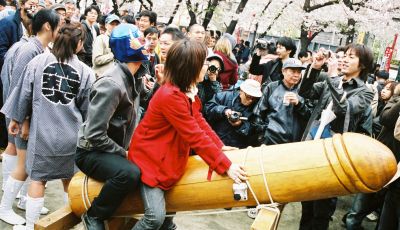 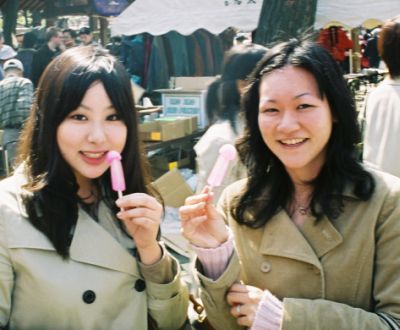 The High Life in Shinagawa

The opulent Prince Hotel in Shinagawa offers an epic three-hour all-you-can-drink deal in their swish 39th floor bar, so me and my similarly opportunistic companions regularly leap at the chance to eviscerate our livers in the lap of luxury. Fun fun fun!
We head up to the snazzy establishment and knock back expertly-made cocktails while seated in a cosy semicircular sofa facing the window, gazing out at a magnificent panoramic view of the city as the sun sets and gives way to a million twinkling lights, our view of the skyline slowly blurring as we get progressively more smashed.

Ordinarily you’d have to sell a kidney to afford a single beer in a classy place like this, but the Prince charges a hilariously small fee for the mammoth drinking session (2300 Yen). I think the plan had been that customers would order heaps of food while imbibing, and the expensive grub would bump up their checks dramatically. Evidently the management hadn’t bargained on penny-pinchers popping into the nearby McDonalds before hitting the bar. The Prince Hotel waiters can get a little snooty when you ask for a seventeenth round of cocktails without having ordered so much to eat as as a bowl of peanuts.

Despite our obvious lack of class, my aspirational pal Jonny fancies himself as something of a high-flying international playboy, and loves to bask in the swanky ambience. Despite being perpetually broke, he masquerades as a wealthy visiting jet-setter, sipping Martini and smoking cigars.
According to Jonny, the Shinagawa hotel bar is the perfect place for romance – you can bring a date and dazzle her with the glamorous setting and breathtaking view, and the fast-flowing booze will double your chances of getting your leg over. If you can’t find a date to bring, never mind – the place is full of ladies on vacations or business trips, hoping to make use of their king-sized beds. Despite his lofty pretensions, Jonny never has two coins to scrape together, so for a bargain-basement lothario such as he, the cheapness of the drinks is the icing on the cake.

One night, however, proved less than economical for Jonny.
That evening, as we drank like lords, he exchanged lusty glances with an attractive girl at the next table. Eventually he made his way over to her, and after a few hours of canoodling and innumerable cocktails she suggested booking a room in the hotel. Blind drunk and hornier than a sex-starved bonobo, Jonny thought this was an excellent idea. ‘Since we’re already in a hotel it seems silly not to take advantage of the rooms,’ he reasoned to himself, grinning in anticipation as they made their way to the front desk. 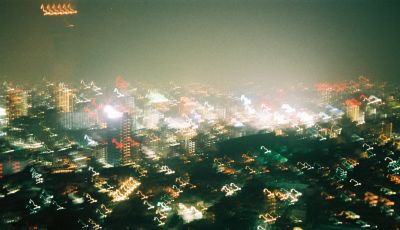 After a night of intense pleasure, the next day he was woken abruptly by a ringing telephone. Blearily surveying his surroundings, he was surprised to find himself in a large, luxurious suite. Since he was alone in the massive bed, it would seem the girl had sneaked off in the early hours. It immediately struck him that this night of fun was was going to cost him a small fortune. He answered the phone with trepidation and was informed by a member of the hotel staff that, since the check-out time had long since passed, he’d have to pay for two nights. Gulp. The resulting check was similar in price to a second-hand car. So this is how the Prince Hotel makes all it’s money. Genius.