The airline ANA are doing their best to make flying less tedious- as of July 20th, draft beer will be available on some of their domestic flights!
As Japan Probe has discovered, apparently they are the first airline to ever offer beer out of kegs.
The toliet queues will be worse, but the in-flight romantic comedies and episodes of Mr Bean might actually become watchable!
The catch is- they only offer 20 glasses of beer on each flight. So what am I going to drink for the other half of the journey?!

Mari at “Watashi To Tokyo” has posted some groovy Sapporo commericals from a few years ago, featuring amazingly agile and dextrous beer-drinkers, leaping about in Matrix-style slo-mo.

But when I’ve knocked back a few Sapporro, I’m more inclined to move like this guy.

Perhaps the best known drinking game among the Japanese, this is named after the circular Yamanote train line in Tokyo. Players go around in a circle (like the titular train line) and name any stations they can think of that are on the Yamanote sen. While playing, everyone claps in rhythm, and each player has to say a station name on the correct beat. If they hesitate, repeat a station already named, say a station on the wrong train line, or can’ t think of anything to say, they have to drink.

Even though it’s called the Yamanote Line game, you can play the game with any category, not just station names. It could be an easy topic, for example pop singers or capital cities, or it could be ridiculously difficult, like Olympic shot-putters, or Yugoslavian film stars.

A variant of the Yamanote Sen game is the “No Laughing Game” (Waraccha Ikenai Geemu). The rules are basically the same, but the aim is to make the other players laugh. If someone giggles, they have to drink. This game is usually quite awkward and embarrassing, and I end up laughing out of politeness.

When I first heard the name of the Yamanote Sen game, I somehow assumed it involved stopping for a drink at each of the 29 stations on the Yamanote line, all in the same day. Madness, you say? Well I’m actually considering attempting it. Watch this space!

Just my luck- I wait all my life for a band of bikini-clad trombone players, and when I finally discover one I find out they broke up last month. Tsk! 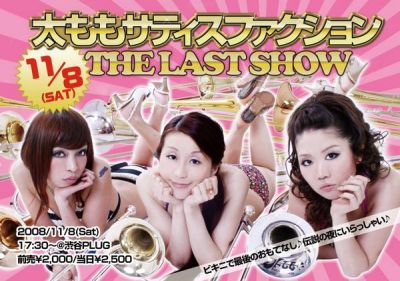 “Futomomo Satisfaction” featured three female trombonists in bikinis,
performing covers of The Ramones, The Rolling Stones and Buggles, alongside original tunes. The three fetching girls, Jackie, Suzuyakko, and Lumiere, certainly put the “bone” in “trombone,” if you catch my drift. 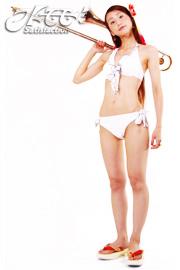 The girls described themselves on their Myspace Page thus:

Futomomo Satisfaction is a Japanese bikini Trombone gal band.
This revolutional icon in Japanese indies, will inevitably fascinate you!

Indeed. This is the exact kind of inspired, uncynical silliness and lack of regard for convention that keeps me living in Japan. Here are some videos of their shows. 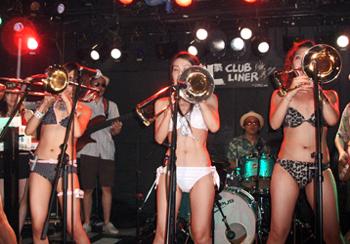 Another peculiar, Japanese, alcohol-related phenomenon is bathing in booze-scented novelty hot springs.
The Japanese almost universally love “onsen” (natural hot springs) and travel hours out of their way to submerge themselves in nature’s hot water. For me, the exhausting two-hour train ride outweighs the relaxing properties of the hot spring, but to say anything bad about onsens in Japan seems to be a major social faux pas. Although, I admit I can see the appeal of the “beer bath” in Hakone’s Yunessun Hot Spring Resort. 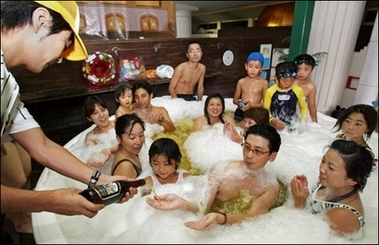 I have already been to Yunessun once and tried a red wine bath. They always seem to have unusual baths materializing for limited times. There was also a worryingly brown and stinky curry bath there too. And a tank for you to put your feet in, which was full of little “doctor fish” who nibble at your bunions and athlete’s foot.

To be frank, though, Yunessun is not a place I’d recommend. It had the atmosphere of a municipal swimming pool, complete with baby piss, the echoing screams of children, and the smell of bleach. The kind of place where you get warts on your feet.
I wandered into the proper, authentic men’s onsen area, and it was just full of wrinkly, hairy, old men, standing in line for hours, stark naked like in some degrading prison camp. They were waiting to squeeze into an onsen so crowded that the bathers were all squashed together like sardines in a tin. Gross! The whole room stank of ball sweat, as well.
That is my idea of hell, not a relaxing weekend treat. I said “no way!” and deserted the place, bought myself a newspaper and a can of beer and sat outside, under a tree, much to the later disappointment of my then girlfriend who was inside the ladies section, and was keen for me to sample some culture.
Now, had I been squeezing into an overcrowded women’s onsen I wouldn’t have been complaining!

I fully intend to check this place out some time. I wonder if they go ape-shit if you don’t leave a tip.

Here are some of my usual out-of-focus snaps, of this year’s Halloween festival in Kawasaki. 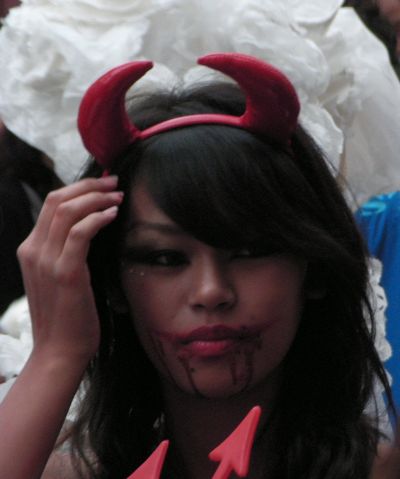 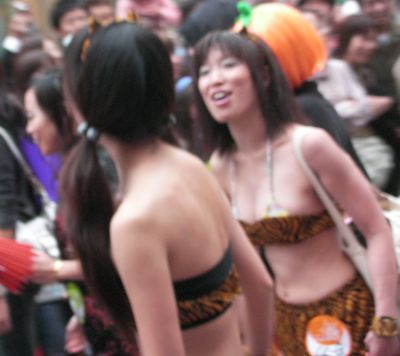 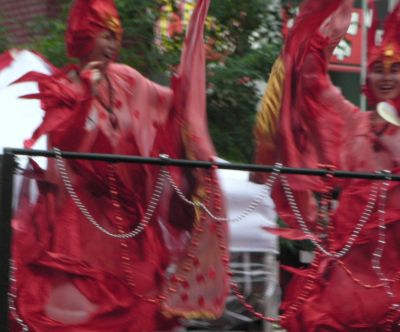 Gaijin Tonic
Create a free website or blog at WordPress.com.